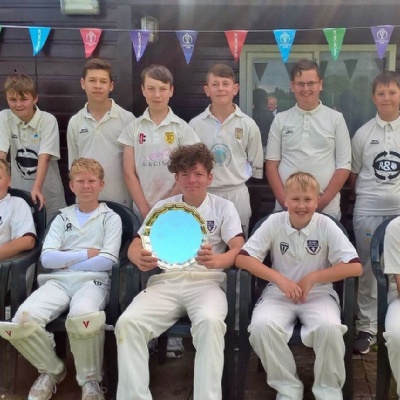 KHS faced Earl Mortimer in the final, many of the U15 team were playing against several years their senior.

KHS batted first with Ollie Langford starring with the bat, recording his second school century of the season with 113 retired, a significant contribution to the KHS final total of 136.

With usual opening bowler Monty Kennerley doing a sterling job as wicket keeper Ollie backed up his batting as he took the ball taking 2 early wickets.

Further wickets came from Ollie Hill (2), Will Smith, Kian Shutts, Will Pratt, Nathan McMillan & Xander Elms-Lester leaving Earl Mortimer over 50 runs short and 9 wickets down on the completion of the 20 overs.

Will & Lewis Pratt both played significant roles, more than holding their own against boys 3 years older.  Captain Ollie Langford was presented with the plate and the match ball for his contribution.

The progress these boys have made as a team is significant with many more playing regularly at Wormelow Cricket Club.