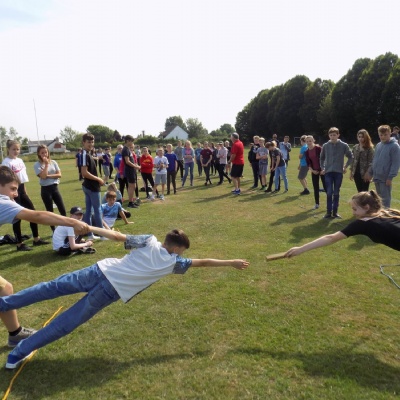 Similarly to year 7, year 8 has taken part in an activity day, based around teamwork. This time, the event is run by an organisation called outdoor coaching UK.

In the morning, the students were brought into 6 randomised teams. They started with basic activities to build their team work skills, and it did successfully bring them together.

Firstly, they participated in an activity where they had to build a tower out of shoes! Odd it may sound, but it did help to build an atmosphere of motivation, which certainly brought the teams closer together. Then, there was no winner! The atmosphere completely changed as the shoes were taken and mixed up. Each student had to take a random pair of shoes, and put them on the owner. It did create excitement, as the pupils worked to find the owner, and there was laughter at the awkwardness of the situation. The laughter, once again, brought the group closer together, especially since people started to feel more comfortable around each other.

Next, the year group participated in a similar activity to year 7, in their activity day. They had to work together as a team, to reach across a chasm and pass a block to the other side of their team. There was laughter, and a genuine sense of competition, a desire to achieve. Teamwork and enthusiasm was certainly improved as the day continued.

The day continued, very cohesively, as the team discussed what teamwork is. Here are some of their ideas:

Listening to each other.

Everyone having a part.

But did they succeed in doing these things?

They certainly did. After their break, the students gathered in their teams and went to a variety of team activities. For example, in one task, a team had to cross a course using just some blocks and planks. To make that mentally challenging task even more intense, they had to guide one of their team members blindfolded. Although it was a difficult objective, the team worked very well together, and achieved what they defined as teamwork, by correctly listening to each other and planning what they needed to do. In all honesty, working well as a team was more effective by far.

However this wasn’t the end of those tedious blindfolds. The blind challenge continued, at another activity. This time, the entire team were blindfolded, except one, the guide. This guide, was obligated to use only the sound of a whistle and a tambourine, to direct their team into a box. The sightless team used a clever strategy of huddling together, so that they all stayed as one. They were very successful by relying on each other, and staying in the same space.

Teams kept facing the infinite challenges, as they strove onwards throughout the day. One team had to get everyone from their team into a net, without touching any of the ropes. There was lifting, crawling, squeezing through the tiny gaps. The atmosphere grew tense, but when all the team had pushed their way through. There was a wave of relief, and a heartfelt cheer.

Every member of one team had to have two fingers touching a pole, without raising it. It’s a lot more difficult than it sounds.

Activities of a similar nature continued through the lovely afternoon. The sun was out and determined to shine its glorious rays on the pupils who were just as determined. However, a few new activities were introduced to add to the variety of challenges. To kick off, the teams were arranged in a star shape. At the centre of this star, a bell would be dropped and a number would be called out. Each member of a team was numbered, so when this event took place, the people whose number was called out had to run rapidly around the star, crawl nimbly through their entire team’s legs and attempt to snatch the bell before anyone else. Of course, the air was full of an intense thrill, as teams yelled and cheered.

Then, there was two particular new activities. The first involved one member of a team lying on a skate board like object, holding a numbered ball. The rest of the team would have to pull that person using ropes, to a row of numbered cones. The person being pulled would have to place their ball in the right cone.

Finally, there was a water activity, in which the team had to try and fill a pipe with water. The issue? The pipe was full of little holes that had to be plugged by the team.

So, overall, a fun day for year 8, and an effective tool in motivating the year group to work as a team. Thank you to outdoor coaching UK and the staff that made this possible.

Read the article with pictures below.