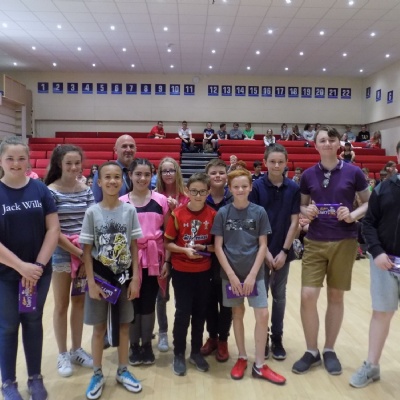 Here are the winners themselves, who received a trophy and chocolate bars all around: Mr Dallimore's Team: The Real Deal.   See the Gallery for more photos of the day.

Another year, another activity day. This year, the year 7 group took part in a fun but mentally challenging event day, held by The Problem Solving Company.

The youngest year group of the school, was split into teams. Each team had to work with each other to complete a large variety of activities which required problem solving skills. The people who ran the event encouraged the year group to have a go at everything, even if it seems difficult.

Indeed many challenges were difficult. Laughter was heard. Chaos was seen, as the teams attempted to race through each puzzle one by one. In general, the teams were resilient and put in a large amount of effort, and effectively supported each other as a team. Teams were to be seen dashing across the field, and there was a feeling of excitement and an overall joyful energy, clinging to the July air.

Mr Sutherland’s team had to travel to the end of the course. Sounds simple, right? But of course not, the challenge was to use only a limited number of wooden steps to get everyone in the team to the other side, with no one touching the floor.

Miss Gibbs’ group was in a fierce huddle as they attempted to break free without letting go of each other. It was described accurately as an “absolute chaos”.

Mrs Kennerley’s group had to use blocks and planks to travel to the other side of an activity without falling other. They chose a clever, slow but accurate method. Likely gaining them extra points.

Mrs Harding’s group attempted a chess like puzzle, where the team players were chess pieces in the challenging puzzle they proceeded with.

Miss Jones’ group rejoiced as they completed a tricky puzzle and grabbed the points that they certainly deserved.

Mrs Finch’s group had to cross the course using only 2 planks with strings attached for each half of the team. They had a strategy of shouting “left! Right!” and moving the named foot in sync. There was falling and fails, but eventually, they got the hang of the puzzle, and continued on with pride, where they would soon meet their well-deserved success.

It was a thriller of a day, the teams were persistent. Points were desperately wrenched out where they could be found, indeed the teams did fight to the very end…

Their hard work was awarded at lunch when they had a greatly welcomed visit from the beloved ice cream van, in which the students were kindly provided with delicious ice cream, already purchased for them by staff.

After that lovely break, the students returned for more activities. The first was called chasm, in which the teams were split on either side of a gap crated by ropes, and had to pass a baton to the other side, with the gap growing with every pass. There was a huge amount of effort, and the managers of the event themselves, claimed it was the “best effort we’ve had”. It was competitive enjoyable, and frankly incredible to see how much effort can increase a team’s performance.

Activities continued, with a mega ball run where teams had to transfer a ball to a bucket, using only pipes. The variety of activities was large, and really did achieve the original goal, since it appeared to bring the year group together, and they worked very well as teams.

And, finally, the teams found out the winners of this thrilling competition. All teams worked very well, and gave lots of effort. They did receive recognition for that. But in the end, there had to be winners…